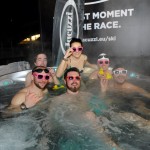 Jacuzzi has been continuing the promotional activities for the official sponsorship of ten FIS Ski World Cup races with renewed promotion of its ‘best moment of the race’ marketing initiative in the French Alps. This weekend will be the turn of the ladies to sample to delights of Jacuzzi hydrotherapy after contesting the races in the Combined, Downhill, and Super G events in … END_OF_DOCUMENT_TOKEN_TO_BE_REPLACED

Jacuzzi has turned up the heat on its hot tub promotional activities by kicking off its official sponsorship of ten FIS Ski World Cup races and launching a bumper prize competition. Following on from its success as a sponsor in the 2016 FIS Ski World Cup, the iconic hot tub brand, which is celebrating its 60th anniversary, was heavily promoted on the slopes at the start of … END_OF_DOCUMENT_TOKEN_TO_BE_REPLACED